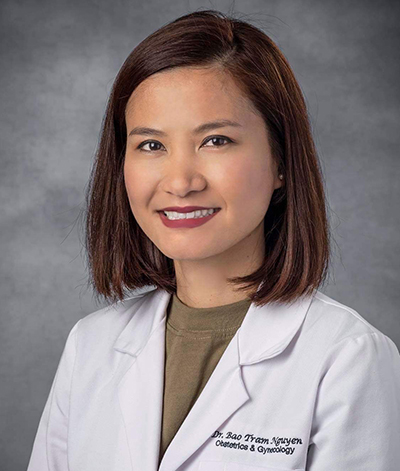 Dr. Bao Tram Thi Nguyen is a board-certified OBGYN, who was born in Nha Trang, Vietnam and came to the United States as a child. She speaks fluent Vietnamese and conversational Spanish. Dr. Nguyen grew up in Gainesville, Georgia and graduated from Gainesville High School, prior to receiving an undergraduate degree from the University of North Georgia. She then obtained a medical degree from the University of Pikeville-Kentucky College of Osteopathic Medicine. While in medical school, she became the recipient of the Health Professional Scholarship Program and became a U.S. Air Force Commission Officer. After graduating medical school, Dr. Nguyen completed an intensive military OBGYN residency at San Antonio Uniform Services Health Education Consortium.

Dr. Nguyen had been stationed at Wright-Patterson Air Force Base in Ohio since 2018 and served as the Perinatal Medical Director. During this time, she also held a faculty position at the Wright State University Boonshoft School of Medicine, where she taught both military and civilian OBGYN residents. In the fall of 2021, she completed her active duty military commitment as Major Nguyen and is thrilled to return home to Georgia.

It has always been Dr. Nguyen’s goal to come back to her home state and care for the community that raised her. She is excited for the opportunity to build relationships and provide excellent comprehensive care to her patients. She provides a wide breadth of services that include contraception, menopausal-related care, pelvic pain, abnormal bleeding, uterine fibroids, well women exam, and infertility services as well as low and high risk pregnancies. Surgically, she performed Davinci robotic surgery and is skilled in minimally invasive surgery and in-office procedures.

Dr. Nguyen is excited to transition into a civilian practice. Outside of work, Dr. Nguyen enjoys running, making delicious pho, and spending time with her husband and young daughter.